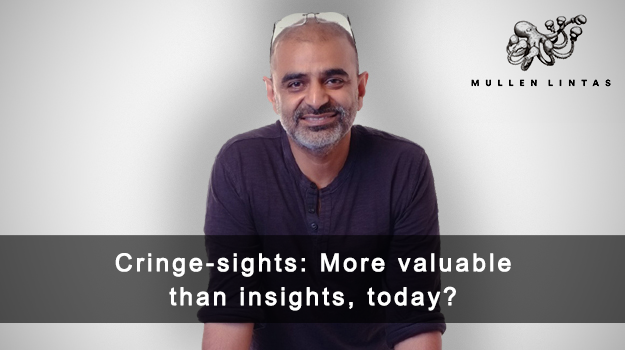 I cringe. It’s my thing.

It’s natural, inborn and innate. From as far back as I can remember, I cringed. From the sight of clothes hanging in balconies to dark wigs on aged, mottled, unmatched faces to the sound of Shabbir Kumar doing a ‘Accident ho gaya rubba rubba’ a la Mohammed Rafi, I cringed because I could.

A cringe is a talent but here’s the thing: it need never be displayed or showcased, right? You can cringe individually, privately without anyone knowing, without being judged or ridiculed. And something that one keeps within only grows and develops. And so it was with my cringe.

Jump-cut. Creative director days. Now I am hearing thoughts, lines, ideas from teams or servicing partners and what I hear constantly is that I have this stone, impassive expression. “You never react, to an idea!” is the plain refrain, again and again. Did I not? I’m thinking. It’s only now much later that I realised that I was cringing, but I never let it show.

Over the years this non-moving facial reaction became my ‘face’. Outside my room there would be talk about this ‘face’. “Did any muscle move, at all, when you told him the idea?”. It became a game, people would play. “There was twitch, but it was a blink and you’ll miss it twitch, so I really can’t say. Why don’t you try?”

I realised that I cringed not just parallel and outwards, but inwards and upwards as well. Towards my own thinking, when I felt a cringe, it would stop me from voicing the thought before my team members and even partners who I had grown close to. This may have buried at least a few nice ideas that would have been converted by someone else into something not-cringeworthy, and that is a loss, unfortunately.

And upwards? There were hundreds of meetings with Balki where all I brought to the table, literally, was my cringe. I would talk less and ‘non-react’ more. Fortunately, it worked as an amazing ping-pong because Balki was totally cool with serving ferociously over and over, even if it was ‘well-left’ on the other side of the table. And Balki was equally cool with ignoring any cringe, when he felt powerfully enough about an idea, an articulation or a script — and there were many such roadrollers over the years. And about Balki’s cringe? That could be heard from the 15th to the 13th floor!

See, a cringe is secondary that way. It’s a reaction to the primacy of an idea. It’s the parry to the swordplay initiated by someone. Yes, you can call it secondary in that sense, but in the world of ideas, it’s an equal if not more important secondary. Without the cringe, the profusion of mediocrity cannot be stopped. A cringe sometimes dictates tonality and that’s damn important too. An idea stated in a tone that does not match the acceptability levels of the audience gets attacked today, socially, as tone-deafness.

A cringe may also be one of the most evolved of emotions in us. You keep your cringe private because when you look around, you don’t find others reacting the same way. In that sense, it is ahead of its time, since the rest of the mass of popular reaction has not caught up to what the ‘cringer’ is feeling.

So there is a mass-cringe and there is a singular cringe. The singular is the one ahead of its time. The mass will catch up soon. It is up to us who say yes or no to public consumption ideas to develop the ‘ahead of time cringe’. Because if you don’t, then at some point that particular piece of communication or entertainment will encounter the mass-cringe.

I now realise the immense value of the cringe.

This is how I see it. The big-shit talk of today ‘digital’ and ‘online’ and ‘engagement’? All that really means is more places to put messages in. Mostly, this leads to an overload of content. When such an avalanche descends on you, you are going to get picky. Only the most entertaining, the most amusing, the most emotive of stuff will get past the 5 seconds of YouTube.

‘Tone’ will dictate the gates of your mind. A tone that does not make you cringe while it says what it needs to? That’s what’s getting past the X-ray scanners at the airport of the mind. Of the millennial or the mid-age. Cos all that tech is developing, evolving and changing people. It’s pushing their levels of acceptance.

Stop just keeping pace with developing tech, keep ahead of the developing mind.

These days, I feel the deep, the layered, the insightful bit of work can be ditched if it cannot capture the tone needed for the audiences. Instead, I’d take something simple and direct and say it charmingly and disarmingly. At the very least, it won’t cause a cringe!

This article was first published in Brand Equity (Economic Times).