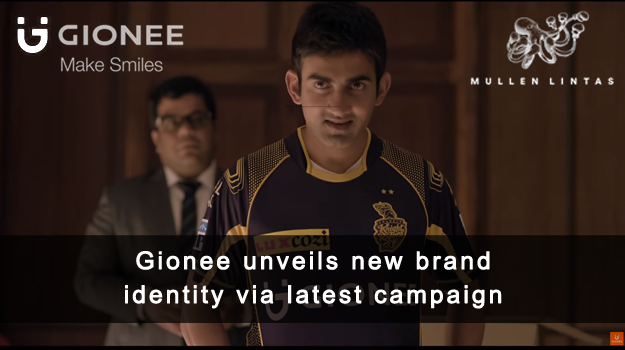 Mumbai: Gionee, a global mobile phone brand is witnessing an identity change worldwide. As part of this exercise, the brand has unveiled a new logo in India. At the core of the logo change lies the fact that Gionee brings smiles on the faces of millions through its innovative technology.

Interestingly, Gionee was associated with Kolkata Knight Riders as their principal sponsor, and there was an opportunity to leverage the team to talk about the logo change, and to launch it during the IPL – a high-decibel sporting spectacle in India. The task of launching the new logo using KKR was effortless and exciting.

The agency that was tasked to showcase this exciting transformation for the brand was Mullen Lintas, Gurgaon.

Explaining the communications approach undertaken by the brand, Nomit Joshi, AGM, Gionee said: “Delighting our customers has always been an attitude that each and every one at Gionee believes in. Our new smiling logo and tagline “Make Smiles” simply expresses it and invites everyone to engage with Gionee and include the brand in the delightful moments of their lives. We are excited that we were able to use Team KKR to unveil our new logo as they provide many of us a reason to smile each time they play. I am sure that the new TVC would convey the same passion, energy and joy that the brand stands for.”

Sharing his views on the brief received by the client for the rebranding exercise, Syed Amjad Ali, Executive Director, Mullen Lintas said, “Gionee is going through an exciting phase and is articulating its next level of growth. The new logo change signals that ambition. The role of the campaign was to create familiarity with the new identity and what it would stand for in future. We intend to make Gionee one of the most sought after brands in the country, something that people aspire for and this is just the beginning.”

The film begins with the KKR team players waiting for their new jerseys to arrive from the dealer. In the interim, the team is seen discussing what new elements would be present on the jersey including a new logo of Gionee. Just then the delivery man arrives and delivers the package to the players who try on their respective jerseys with much joy. On seeing the new logo that signifies a smiling face, the team captain Gautam Gambhir goes on to exclaim that ‘Gautam would no longer be Gambhir’ after wearing this jersey.

Sharing the creative execution undertaken for the campaign, Shriram Iyer, NCD, Mullen Lintas added, “The task of unveiling the new Gionee logo coupled with the brands association with team KKR allowed us to put the jersey to good use. The idea of a last minute change in the logo leads to a funny misunderstanding among the players. We are excited about this very unconventional way to launch a new identity.”

The film has been directed by Shayondeep Pal from Elements and has been launched ‘on and offline’ to coincide with the ongoing IPL season.