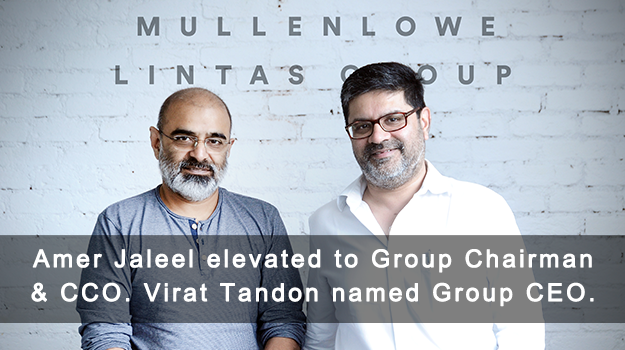 MullenLowe Lintas Group is naming its group leadership team in India with two elevations from within. Amer Jaleel has been named Group Chairman and Chief Creative Officer. Partnering him, on business, will be Virat Tandon who’s being named Group CEO. In their new roles, the duo will lead the group mandate in India overseeing its three agencies; Lowe Lintas, Mullen Lintas and PointNine Lintas.

Speaking of the new Group leadership, Alex Leikikh – global CEO MullenLowe Group said, “A few years ago, we had asked Amer and Virat to start our second agency in India, Mullen Lintas, and they have built it into a top 10 agency in the country in just two years. Amer has been a creative leader of our group in India for a very long time now, and Virat embodies the entrepreneurial spirit of the MullenLowe Group, and as such I am delighted to have them steer our overall business in India to even greater success.”

Amer Jaleel joined Lowe Lintas in 2002 and has held multiple creative leadership positions including Chief Creative Officer. Virat Tandon joined the group in 2004 in the New Delhi offices of Lowe Lintas and has since played various senior roles in the network in India and Singapore. When the group started Mullen Lintas in 2015, it named Jaleel and Tandon Chairman and CCO, and CEO respectively.

Speaking of their new roles, Jaleel and Tandon said, “We have a lot of strong assets in the group. Two top ten agencies, Lowe Lintas and Mullen Lintas; a very promising incubation, the Omni-channel agency PointNine Lintas; some of the industry’s best and brightest creative, strategy and business leaders; and last but not the least a culture that makes us stick together and tick. The future is looking different and exciting. There could be no better time for the group to embark on this journey. To stay at the top of its game, MullenLowe Lintas Group realizes the importance of investing in building a strong talent pool with new skills that are relevant in the digital and hyper-connected world. It’s becoming more challenging for brands to win in the marketplace as the consumer is evolving and most categories are being disrupted and transformed due to technology. Clients are looking for all the help they can get from their agencies to win in this new reality. We want to continue to be our clients’ biggest strength.”

In a separate development, Arun Iyer – Chairman and CCO of Lowe Lintas has decided to move within the agency to become a creative consultant. Arun plans to start a venture of his own and will transition out of the agency over the next year. The agency has planned a twelve-month transition period, during which he will continue to work for some key clients and help with succession planning.

Iyer, spoke of his decision, “I have had the privilege of being part of an institution. I have spent a little over 15 years here. And it is home. Over the last few years, I have been passionate about start-ups and have played a role in developing some strong brands such as Byju’s, Freecharge and Grofers. Going forward, I am planning to work more closely within the start-up eco-system.”

Adds Amer Jaleel, “Arun and I have been brothers-in-arms for over 8 years now. We’ve been shouldering the equity and reputation of Lintas together and that gives you a sort of a feeling of being in the same womb! Arun has, over the last 3 years, taken the spirit that Balki infused in Lowe Lintas to a different zone and moulded the agency in his own way. A large part of my job for MullenLowe Lintas Group will be to take that imprint forward.”

Jaleel and Tandon’s appointments take place with immediate effect. They are working on plans to transform MullenLowe Lintas Group in a few critical areas to remain the key agency partner for clients.