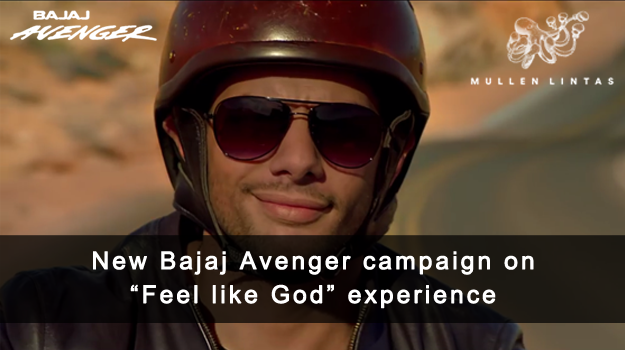 The era that we live in today is replete with chores and responsibilities that demand something more than the ordinary. Every day is a struggle where one has to literally push and challenge oneself in their pursuit to achieve something over the ordinary. This adage is particularly true for regular office-goers and those with mundane 9-5 jobs, who are often caught in a rat race to stay afloat and be noticed. But then there are those just chose to veer from the ordinary and do things their own way. Or rather approach life in a relaxed and non-conformed manner. These are the doers that Bajaj Avenger seeks to communicate with as it unveils its latest campaign.

To be launched first on the digital platform, the integrated campaign borrows from the successful theme of ‘Feel Like God’ which made the Avenger a highly sought-after bike when it was launched more than a decade ago. In keeping with the original philosophy, the latest campaign that has been conceptualized by Mullen Lintas, shows the Avenger man traversing a ‘break free’ journey yet again and sees him giving up certain choices that would have otherwise impaired his freedom.

The campaign has been developed based on the insight that there is too much cut-throat competition around us and that everyday has become a rat race for all. People today are competing with everyone and for almost everything. And while we are busy competing and dealing with insecurities of everyday life, we have lost sight of life itself. We have forgotten the bigger picture, forgotten the joy of discovering who and what we are. That’s because all we end up doing is playing the rat race. The new campaign thus serves as a wake-up call, especially to the youth, bringing them face to face with the bitter truth of their lives. It makes them relive and discover life; making them ‘Feel like God’.

Commenting on the launch of the new campaign, Sumeet Narang, Vice President – Marketing –Bajaj Auto Ltd, said, “We launched 3 new variants of the Avenger – Cruise 220 and Street 220 and 150 and they have been hugely successful from day 1. The bikes not only serve well for daily city commute, but are also perfectly designed to take long weekend and adventure rides with aplomb. Their relaxed riding position, impeccable performance and world class looks have made them a big draw especially with the hard working young professionals. Our interactions with customers revealed their love for weekend escape trips on Avenger. Several Avenger riding communities have also come up which celebrate the feeling of liberation this bike offers. Our brief to Mullen Lintas was to dramatise this sense of liberation but with a context to daily life”.

Providing his perspective on the idea for the campaign, Ayyappan Raj, Executive Vice President – Mullen Lintas, Mumbai said, “For the tribe of Avenger riders, ‘Feel Like God’ is a way of life. Which is the reason why we have approached the entire campaign more like a lifestyle brand and not a typical two-wheeler brand. From the digital videos (demonstrating the riding experience) to all the social media engagement and the special rides, we’ve tried to create a ‘Feel Like God’ experience for the Avenger aspirers. The coming days will see more communication being unveiled that will espouse the cause even further, including the activities planned through our FB page ‘Avenger United’.”

The campaign shows the Avenger man undertaking his ‘break away’ journey reminiscing the things and experiences that would have otherwise slotted him among the ordinary. A journey where he forgoes the rush-hour race where all scramble to reach their office in time, or the race to grab the most sought-after chair in the office or to gain good monetary raise, or even the race to garner fame and a corner seat in the office…basically stay away from the rat race and opt for a life that detests these temptations. It is when one rises above from his or her everyday role that they get to experience the ‘Feel like God’ moment.

Explaining the creative thought-process, Shriram Iyer, National Creative Director, Mullen Lintas said, “The campaign attempts to capture the spirit of ‘Feel like God’. Again. An idea that originally launched the bike a few years ago, remains as relevant today as it was then. Back then we saw a rider effortlessly forgiving the people who did him wrong. And now, it’s a rider who laughs softly as he imagines the world of men caught in a rat race. He imagines the futility of it all. And as he takes in the road, the sky, the sun and the wind, he ‘Feels like God’. He rises above the everyday. He distances himself from the preoccupations of modern life. He chases nothing; rather, he ‘Feels like God’.”

On the execution of the TVC, Shriram said: “The concept came with the added challenge of shooting rats, luckily trained rats. Expert trainers made it look easy. No CG, no effects, just great actor rats.”

After a digital burst for a few days, the campaign would traverse the offline route and play on popular television channels across regions & genres.